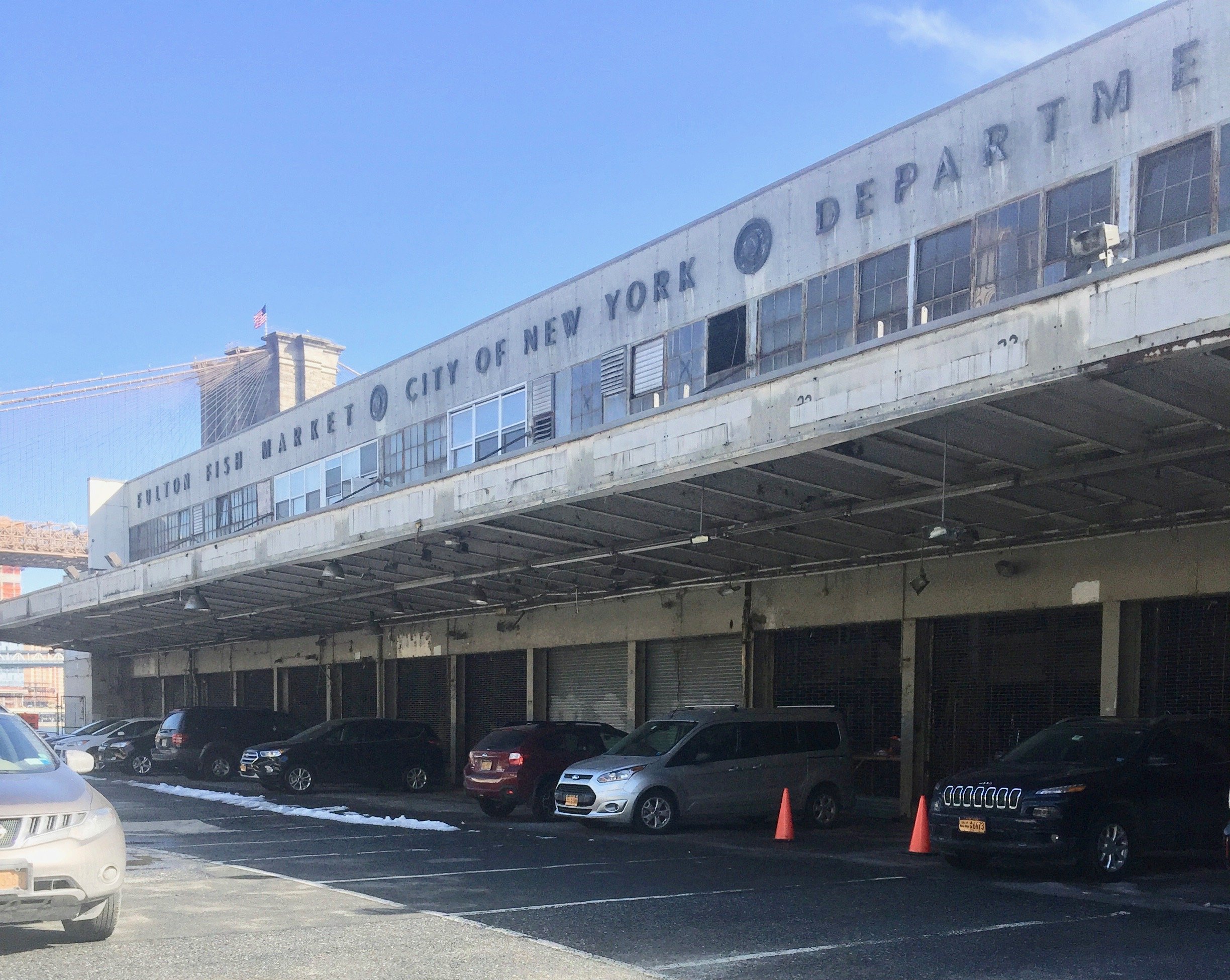 This brief is part of the WHY WE FIGHT FOR THE SOUTH STREET SEAPORT series, to inform the public about the struggle to keep the Seaport historic in the face of commercial pressure.

The fate of the New Market Building, which is not included in the Seaport Historic District, is among the most urgent issues that will determine the future character of the Seaport. Plans to demolish the building and replace it with a luxury apartment tower were abandoned in 2015, in the face of overwhelming opposition from community groups and elected officials. But the building is again threatened by the city’s surprise announcement in early January that it plans to demolish the building, as soon as this fall. Save our Seaport opposes this demolition and calls for open discussion of public uses for this important site, rather than private development.

The New Market building, opened in 1939, is located between Beekman Street and Peck Slip on a platform over the waters of the East River. It operated, along with the Tin Building to the south, as the Fulton Fish Market until 2005.

But the site was used as a market long before this building: Maps dating from 1660 show a fish market there, and documents from 1770 indicate that Long Island oystermen brought their oysters here to sell. The city established a market on the site in 1821.

Mayor Fiorello La Guardia proudly spoke at the dedication of the New Market Building, which showcased a major city investment in the fish market and in the workers who depended on it for their livelihood. Designed by architects Albert W. Lewis and John D. Churchill, the building embodied the simple, functional design approach of similar publicly backed projects of the time, including WPA initiatives undertaken as part of the recovery from the Depression.

The New Market Building is approximately 40 feet high, with two full floors and a mezzanine office area in the rear of the first floor. The first floor contains columned bays open to the land-facing side.  The 40,000-square-foot market incorporated new freezing technology that promoted the safer handling of fresh fish, reflecting safety and cleanliness concerns driving many of Mayor LaGuardia’s initiatives. The building’s design incorporated wet floodproofing, a  FEMA-approved resiliency method that allows floodwaters to flow through and out of a structure rather than being trapped within it.

In 2005, the Fulton Fish Market at South Street was relocated to new quarters in Hunts Point, South Bronx. From this point on, the New Market Building’s fate would be tied to dueling visions of its future.

The city’s 2004 East River Waterfront Study and report initially included a conceptual design for a reconstructed building, with a new public purpose, that would be approximately the same size and footprint as the 1939 New Market Building. But from 2005 on, the city — through the Economic Development Corporation (EDC) — was embracing a new “public-private” approach to investment in public assets.

The vacant New Market site was included in a secretly negotiated 2011 agreement with the Howard Hughes Corporation (HHC) that gave the company an option to develop the site, along with other public assets in the Seaport district. This option contained specific “milestones” for HHC to exercise, which the city now considers to have passed. HHC has taken the position that there is no contractual time that limits this option, leading some to believe that this will be the subject of future litigation.

Since the New Market Building has not been in use, the city has neglected maintenance, allowing it to fall into disrepair.  In 2006, inspectors described the New Market site as being in “Fair” condition; by 2010, it reported the site in “Poor” condition.  By May 2015, the EDC declared that due to “emergency” safety issues, the New Market Building needed to be demolished. Faced with fierce opposition to this “demolition by neglect” and intervention by elected officials, EDC backed off —in the short term— and focused on demolishing Tin and New Market “cooler areas” only. Two years later, with no public discussion and no plans for the future of the site, EDC announced plans to demolish the New Market Building by the fall of 2018.

With the city’s history of making deals for the disposition of the Seaport’s assets behind closed doors, it’s crucial that community advocates, preservationists and elected officials mobilize to ensure that the New Market Building stays in the public domain, and to restore it to a new public purpose is in keeping with its architecture, waterfront location, and place in the working history of the Seaport.