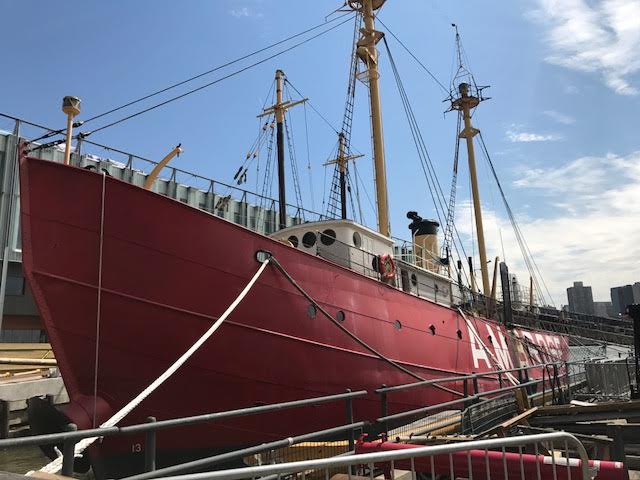 This brief is part of the WHY WE FIGHT FOR THE SOUTH STREET SEAPORT series, to inform the public about the struggle to keep the Seaport historic in the face of commercial pressure. Here’s why we fight to preserve  the Lightship Ambrose.

ONE OF THE best-known vessels at South Street Seaport Museum is USLV No. 87/WAL-512, more commonly known as the Lightship AMBROSE.

This National Historic Landmark vessel is arguably the most celebrated lightship in American history, due to her role as the very first ship to mark the entrance to the Ambrose Channel, the deep-water passage into New York harbor for ships from around the globe.

Beginning her service with the US Lighthouse Establishment in December 1908, the AMBROSE’s main purpose was to be a stationary navigational aid, outfitted with the latest technology to allow ships and later airplanes to safely come in and out of New York. Atop her two masts are lighthouse galleries, which would shine a recognizable beacon to all mariners entering the channel. Between the masts are powerful steam whistles used to send a sound signal far and wide. On her foredeck is a gigantic bronze bell, to be rung in periods of thick fog and other restricted visibility.

Beneath the AMBROSE’s waterline is a submarine bell that would send pings through the water to let modern ships detect her audibly long before they could sight the ship. And on her aft deck is the radio shack, a marvel of science that sent out a radio beacon signal as well as carried out communications with many ships and airplanes simultaneously — a critical part of New York City’s transportation infrastructure during one of its largest periods of growth and modernization. The ship was kept in her specific location thanks to the 5000-pound  mushroom anchor carried centerline in the bow.

USLV-87 served as the AMBROSE lightship from 1908 until 1932, when a newer lightship took over the role. After her service at the Ambrose Channel, she was on standby as a relief lightship until 1936. Then the vessel was stationed as the SCOTLAND, another lightship station off the New Jersey side of Lower New York Bay. The ship was renumbered WAL-512 by the US Coast Guard upon their absorption of the US Lighthouse Establishment in 1939.

In his 1928 article about the ship for the New Yorker, the iconic writer E.B. White labeled her, “… the most exciting harbinger in the North Atlantic — the Ambrose Lightship.”

The ship had seen her fair share of excitement, without leaving its anchored post, and would continue to witness more until the end of her service. The AMBROSE lightship was used as the official marker for the ocean liners competing for the Blue Riband to complete their transatlantic voyages, and also for the sailing yachts competing in the America’s Cup races. Ships carrying millions of hopeful immigrants to a new life in America would heave-to along the lightship, waiting for the clock to strike midnight to rush in to Ellis Island when the immigration quotas refreshed.

During World War I, the lightship kept a sharp lookout for German U-boats and other enemy ships, and she watched as the American Victory Fleet paraded out of New York at the war’s end. The ship was at the edge of national waters, so the infamous Rum Fleet would try to run past her for New York and New Jersey during the Prohibition Era. Many near-collisions and heroic rescues took place at the ship’s station, but mostly she and her crew would maintain a constant vigilance over the Ambrose Channel entrance.

During World War II, the lightship was outfitted with a deck gun and served as an “examination vessel,” which would inspect ships entering the port from sea. Finally, she ended her active duty with the USCG in 1964 and was used as an exhibit ship in the World’s Fair in Queens before being fully decommissioned and acquired by South Street Seaport Museum in 1968.

Ultimately, the AMBROSE lightship and the channel she marked directly enabled New York to prosper as the financial and cultural capital of the world, when humanity stopped using horses and sailing ships, lept through the period of steam engines, and went on to automobiles and airplanes as their primary means of long-distance transportation.

Ironically, it was through this prosperity that New York declined as the world’s busiest seaport. The lightship station was replaced in 1967 by a light tower, followed by another tower and lastly a large buoy that is there today. However, the Lightship AMBROSE remains one of the enduring icons of the global greatness of New York City.

More about why we fight for the South Street Seaport here.