Manhattan Borough President Gale Brewer and New York City Councilmember Margaret Chin have been observing what’s going on in the South Street Seaport and they don’t like it. On Aug. 19, they wrote a letter to Alicia Glen, the city’s deputy mayor for Housing and Urban Development, to protest The Howard Hughes Corporation’s appropriation of public space in the Seaport and its exclusion of the South Street Seaport Museum from what it has been branding as the Seaport’s “Culture District.”

“While we agree with the need to enliven the Seaport, this is an effort that should be undertaken by the community, local businesses and the museum; we would like to see a process that incorporates broader input beyond what has currently been the case. Specifically, we would like to understand how the Brooklyn Bridge Southeast Urban Renewal Plan (URP), which is in effect until 2068, affects what is permissible in terms of programming in that space.”

Brewer and Chin point to specific clauses in the URP that state that open air cafes, canopies and mobile vending units such as The Howard Hughes Corporation has installed on Fulton Street are excluded because they would compete with local businesses and obstruct pedestrian traffic.

“To our knowledge, the permissible areas and activities do not extend to the entirety of Fulton and Front streets, only to portions immediately adjacent to some of the commercial properties, but we are aware of programming by Howard Hughes Corporation (HHC) in many of the public spaces in the Seaport that seems to conflict with certain provisions in the URP,” they write.

“We have observed, for example, essentially all of designated pedestrian way of Fulton Street between Front and South Streets and the public space on Front Street between Beekman Street and Fulton Street taken up by Smorgasburg, a food operation brought in by HHC that appears to compete with many of the food establishments nearby. We are unaware of the existence of any approval that has modified these provisions of the URP.”

Brewer and Chin ask Glen to clarify what is allowed and not allowed under the URP and to state “what the city regards as an appropriate framework for coordination of programming that significantly incorporates the input of a broader spectrum of local stakeholders.”

To date, The Howard Hughes Corporation has been announcing and implementing programming as though it, and only it, were in charge of the area. Last summer, for instance, it installed food trucks in the Seaport that were repeatedly decried by Community Board 1 and by local residents as impeding foot traffic on Fulton Street, blocking sight lines to the South Street Seaport Museum’s shops and ships, emitting noxious fumes and competing with local restaurants.

HHC responded to the criticism by moving some of the food trucks, but they remained in the Seaport until the end of the summer season.
HHC has also programmed music events into the Seaport that have disrupted the historic ambiance of the area and created noise that bothered local residents.

A more recent infringement is HHC’s newly announced “Culture District,” which Brewer and Chin, in their letter to Glen, mention with disapproval and alarm.

“While we appreciate HHC’s effort to enliven empty stores and understand the need to
maintain and enhance vitality in the Seaport District, we are concerned by the absence of the
Seaport Museum and other local entities in this endeavor and in the programming of the public
spaces in general,” they write.

“As an example please note that one of their Culture District events is scheduled to occur on Cannon’s Walk, a public space off of Front Street. This space was the subject of an exchange in October – November 2014 between the Manhattan Borough President Office and EDC over the very same concern — the privatization of this public space. While obviously with proper permits events can be held in public spaces, we would like to see public space usage that incorporates local businesses and the major cultural anchor of the area, the South Street Seaport Museum.”

“We’ve created a new culture constellation,” The Howard Hughes promotional material brags, with no mention of the South Street Seaport Museum. The Guggenheim, the Center for Architecture, Eyebeam, ArtStart, AIGA/NY, Harper Collins Publishers, and No Longer Empty are the “renowned cultural institutions” favored by Howard Hughes.

They note that the South Street Seaport Museum has been hamstrung by the terms of its lease from becoming the robust and financially viable institution that was envisioned when the museum was created.

“The current Seaport Museum lease was negotiated thirty years ago and was formulated in the
context of a complementary market lease that entailed financial obligations toward the museum
by the Rouse Corporation, HHC’s predecessor,” Brewer and Chin say. “However, since then, the market lease was renegotiated in a manner that excluded financial support for the museum, while the Seaport Museum lease has retained its original restrictions. This therefore places the museum in an unfair and impossible financial situation: it is limited by its city lease from competing with Howard Hughes Corporation and other local entities when it comes to retail activity for purposes other than those directly related to the functions of the museum, but still can face competition in the cultural programming arena by independent efforts to organize cultural activities without
museum input or meaningful collaboration.”

Chin and Brewer ask for a meeting with Glen “as soon as possible to discuss the programming of public space in the South Street Seaport area as well as how we can assist the museum in achieving and maintaining its given role as the cultural anchor of the area, specifically given the terms of the
Seaport Museum lease and how those, if a hindrance, should change.” 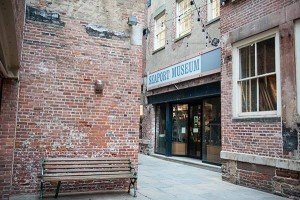