The Sciame building at 80 South St. was acquired by The Howard Hughes Corporation along with some neighboring property and was flipped after a few weeks for a 110 percent profit.

Crain’s New York Business broke the news on Friday, Aug. 7. Chinese investors had paid $390 million for the right to build a gargantuan tower just outside the South Street Seaport Historic District. According to Crain’s, a U.S. subsidiary of the Beijing-based investment firm, China Oceanwide Holdings, had agreed to pay The Howard Hughes Corporation for the development site at 80 South St. and a neighboring parcel at 163 Front St. This, said Crain’s, would enable the erection of a “roughly 820,000 square foot building, with about 440,000 square feet of residential and 380,000 square feet of commercial space … on the combined site, which Howard Hughes bought in two separate deals.” Early in 2015, Hughes had acquired the sites for an estimated $186 million and made a 110% profit in flipping them. (For the complete article in Crain’s, click here.)

The news was greeted with dismay by Save Our Seaport, a grassroots organization concerned with the preservation of the South Street Seaport Museum, the Seaport Historic District and the maritime heritage of the Seaport. It issued a press release that said that, “HHC was tasked by the Seaport Working Group to find an alternative site for its much reviled Seaport Tower [on the South Street site of the New Market Building near the Brooklyn Bridge], and seemingly had acquired development rights from Seaport Historic District buildings to add to their portfolio. The 110% profit that they made on a property that had been in their portfolio for a mere matter of weeks and that exhausts all of those air rights is a matter of concern to Save Our Seaport.”

David Sheldon, a spokesperson for Save Our Seaport, said, “The Howard Hughes Corporation has used its foothold at the Seaport to convert more of our city to fodder for overseas investment while providing a cash windfall for its shareholders. Is this the ‘stewardship’ we can expect from HHC for the Seaport Historic District?”

Michael Kramer, a South Street Seaport resident and member of both Save Our Seaport and the now defunct Seaport Working Group that was charged with creating development guidelines for the South Street Seaport, also weighed in. He said that he hoped that this “windfall property transaction” would lead HHC to “be content with an under-market lease at Pier 17 to reincarnate their shopping mall.” He also expressed the hope that Hughes would “abandon their Options 1 and 2 so that a Master Plan can be created that respects our Historic District, stabilizes the South Street Seaport Museum, provides adequate berthings for a ‘Street of Ships’ and brings back a destination public market.”

However, judging by past behavior, it seems unlikely that The Howard Hughes Corporation will be satisfied with anything other than maximizing the return on its investments. An article in Forbes magazine, “Baby Buffett: Will Bill Ackman Resurrect The Ghost Of Howard Hughes And Build A Corporate Empire?” Forbes, 5/25/15) discussed billionaire hedge fund manager, William Ackman, founder and managing member of Pershing Square Capital Management, L.P., a registered investment adviser. Ackman is also chairman of The Howard Hughes Corp. and controls almost 40 percent of its stock.

According to Forbes, in 2014 The Howard Hughes Corp. “reported $635 million in revenues and $190 million in operating profits on $5.1 billion in assets, with 45 million square feet of retail, commercial and residential land in its development pipeline.” HHC’s South Street Seaport holdings are only part of the picture, but, says Forbes, the Seaport is “one of Howard Hughes’ most valuable assets.” 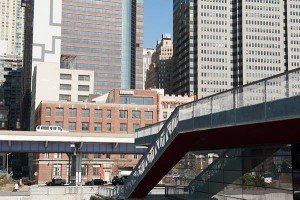